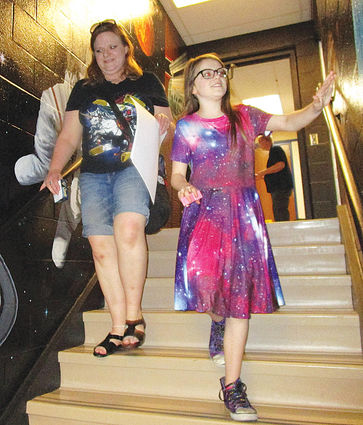 Amy Gray (left) and her daughter Destiny, 12, head down the steps to the Hollidaysburg Area High School Planetarium for the live Zodiac show on Thursday, April 18, admiring the murals along the way. This was their first show at the planetarium and they just purchased a telescope. Destiny is studying constellations in the sixth grade at Penn Cambria, Cresson.

Guided by Fred Marshak, planetarium volunteer assistant, astronomy and astrology fans watched as the April sky shifted to what earthlings would have seen in 1983 B.C.

Marshak, a retired HAHS Astronomy teacher, in this first live show in the new planetarium, demonstrated how different the placement was of well-recognized constellations when astrologists first identified Orion, Pisces and the other zodiac symbols. He also turned of...