GAME OF THE WEEK 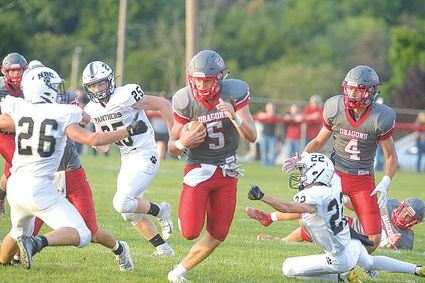 Senior quarterback Braden Kitt (5) leads the Central ground attack with 190 rushing yards and four touchdowns on 34 carries. The Dragons will be looking for their first 3-0 start since 2009 Friday, Sept. 7, as 2-0 Clearfield will visit the Roaring Spring Athletic Field.

A battle of 2-0 squads – Clearfield and Central – will kick off at 7 p.m. at the Roaring Spring Athletic Field.

Clearfield has started 2-0 in each of the last three seasons. The Bison finished 12-1 last season.

Central is off to its first 2-0 start since 2016. The Dragons have not won their first three games of a season since 2009, when they won their first seven en route to a 10-2 campaign.

Clearfield enters Friday's game averaging 423 total yards per game, including 271.5 through the air.

Through the air, Kitt is 16-for-29 for 176 passing yards. Freshman quarterback Jeff Hoenstine has thrown for 124 yards and two touchdowns on 5-of-6 passing. Hoenstine is also the team's leading receiver with 10 catches for 114 yards receiving.

In other action Friday, Claysburg-Kimmel, Northern Bedford and Williamsburg will each battle Inter-County Conference opponents.

Hollidaysburg will travel to State College Friday in a battle of unbeatens. Each team sports a 2-0 record.