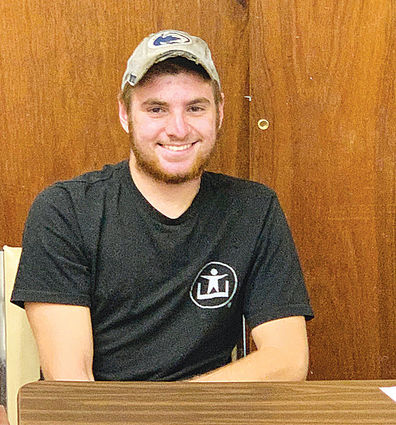 Brayden Claycomb, a senior at Northern Bedford High School, discusses his senior project with Woodbury Councilmembers at their Sept. 3 meeting. Claycomb worked on the borough's truck as part of his required graduation project.

The Kauffman house is still a topic of discussion at each meeting. Council has called the home dilapidated and a safety risk to borough residents.

Mayor Dave Chesney and Vice Chairman Shawn Claycomb have been working to find out who is the owner of the property. Both parties will re-check their findings and then discuss what options the borough must take to resolve this issue.

Sewer and mowing costs has still not been recouped regarding the Kauffman house. Code Enforcement will also be contacted to see what it can do about the issue. Councilmembers think that taxpayer money is being used to keep this up, so it needs to be resolved.

There was no new information discussed regarding a new roof for the Woodbury Area Community Center.

Council noted that Ken Ott, representing the center, said that the late Jim Beach had given $25,000 to the WACC to be used for repairs. Also, Blair Roofing had provided a bid of $26,500 a few years ago for the installation of a new roof.

There is still a vacancy for the majority inspector for Woodbury Borough, which must be filled before the November election. Anyone interested in the position is asked to call the voter registration office, Bedford County courthouse.

Brayden Claycomb, 17, a senior at Northern Bedford High School, Loysburg, was in attendance. Claycomb has been working on his senior project, required for graduation. Claycomb has been working on the borough truck and has accomplished this with 28 hours of work. He painted the bed liner and painted areas on the outside of the truck. Claycomb took pictures of his work and showed them at the meeting. He explained the project and what he has done. Councilmembers thanked him for his service and said they were grateful for the work he provided.

The council discussed weeds that are too high at one home, which is affecting the health of a neighbor, and a new ordinance for sidewalks. The sidewalk ordinance has been in place since the early 1900s.

The council will hold its next regular meeting at 7 p.m. Monday, Oct. 7.