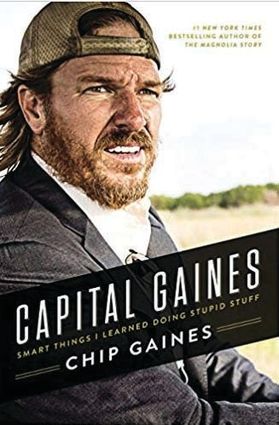 The sub-title of "Capital Gaines" is Smart things I learned doing stupid stuff. Chip Gaines of Fixer Upper and Magnolia Market wrote about the path he has followed since leaving school. Chip decided he could be an entrepreneur in his 20s and started up three businesses. He worked side by side with people who were a different color and spoke a different language. He loved working with these people and wanted to know more of their culture and language.

So he decided to go to a school in Mexico for three months. He left his then girlfriend, Joanna, to tend his three businesses: a house-rental business, a landscaping business and a wash-and-fold business. Surprisingly, Joanna went along with the plan. Unfortunately, Chip depended on the rental checks coming in, but when Joanna did not receive checks from college students on summer break, things got messy. He had been working on very small margins. Chip called Joanna, collect, to tell her that he was doing well with his Spanish and she gave him three days to get back home and clean up his mess or they were through. Obviously, he made it back in time.

Chip and Joanna married in 2003. Chip uses the rest of the book to describe the life-lessons he has learned. Chip talks about taking risks. He is a big risk taker. He has learned to trust himself and his wife in the decisions that they make. They built their Magnolia store and expanded into home remodeling. They temporarily closed the store and opened again, years later. You have to trust your instincts as to whether to start a business or continue it.

Chip loves people. He wants to see them grow and learn and become what they should be. Their employees are given various responsibilities. There is not just one job assigned to their employees. Each has to jump in and do what has to be done. This gives them growth through experience.

Chip and Joanna decided to discontinue their Fixer Upper program. They felt that to continue would spread them too thin. They had three responsibilities: Their family, the Magnolia Market, and the Fixer Upper show. While they enjoyed the television show and the benefits it brought their business, they needed to focus on the two most important things.

Chip closes the book by encouraging the reader to use your logic and follow your passion. One of his passions is to learn and understand different people and make them his friend. He wants to become a runway to help people soar. He wants to see his children be whatever their passion leads them to become. In addition, he would like to be a bridge of understanding. There is so much discord in America these days. Perhaps we should all learn to be better listeners and work together.