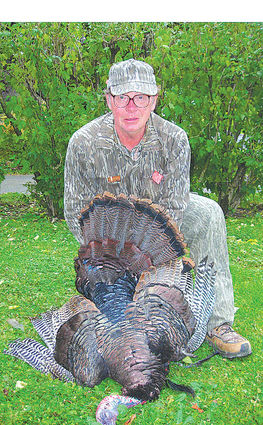 The turkey turned out to be the biggest autumn turkey of Richard Tate's 50-year turkey-hunting career. He weighed 19 pounds and sported two beards: one 9 inches, the other 3.

Last fall, my autumn turkey season did not begin until Monday afternoon of the first week – the only week in WMA 4A. It rained cats and dogs on Saturday and continued through Monday morning. As an old retired guy who despises hunting in the rain, I sat it out until the rain ended.

On Monday afternoon, I took a short hike to a knob where I had found some turkey scratching near a grapevine tangle before the season. I sat and called till nearly dark; but if any turkeys were nearby, they did not answer me.

On Tuesday, I made a long-hike hunt through some local state game lands. I saw a little...