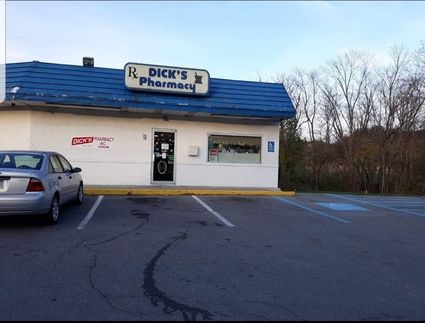 Dick's Pharmacy has announced it will be closing its stores in November. Two Cove communities, Williamsburg and Claysburg, will be affected by the closure.

Two Cove communities are losing a business with the announcement that Dick's Pharmacy, an Altoona-based business founded in 1928, will be permanently closing its doors this month.

The closing of the Williamsburg location comes at a time when civic leaders are trying to lure businesses to the borough to fill empty storefronts.

This is the second business of convenience to leave Williamsburg in the past few years. The town's only grocery store, Hometown Markets, packed up and left three years ago.

With the closing of the pharmacy, Williamsburg residents will have to travel to either Martinsburg or Hollidaysburg to fill prescriptions.

Dave Cadle, who is leading the effort to revitalize Williamsburg, said losing the pharmacy will be an adjustment for those who don't drive or have difficulty getting around.

Cadle said that while he is sorry to see the pharmacy leave, it won't deter the community's efforts to work on rebuilding the town as a destination for travelers and businesses.

"We don't like losing the pharmacy, it has served us well," he said. "So now we look for another opportunity."

Cadle said the community can't just sit around and mourn the loss of another business, but rather find a way to lure another into the area.

"A door closes, another one opens," he said.

Cadle said it was difficult losing the grocery store, and now the pharmacy and any time a business that people depend on closes, a period of adjustment is needed.

"It will create a hardship for some people, but we have dealt with this before, so we will adjust," he said.

Dick's is also closing its flagship location in Altoona, which has been in business since 1928. Approximately 30 employees will lose their jobs.

Dick's Home Health Care in Altoona, which provide medical equipment for patients in their homes, will remain open.