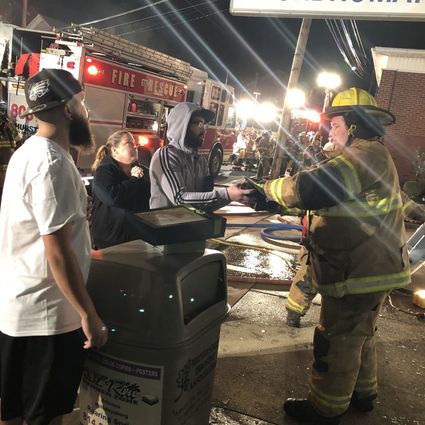 Firefighter Smith hands a box of photos to the male tenant of the Martinsburg apartment. The box of personal photos was very important to the young man. After controlling the fire, firefighters went beyond the call of duty to find and retrieve the photos for the young man and his family.

As many of you know, Karen and I suffered a loss on Sunday, Nov. 10, when the Martinsburg laundromat caught fire. The damage to the property was significant but no one was hurt.

As I stood there on the sidewalk watching my business burn, I had a lot of thoughts. One of them was, "This is a life-changing event." That is certainly true, but I'm hoping that it is life changing only by adding a story that I can tell to my grandkids. I hope it ends with me telling them how Karen and got the laundromat open again just weeks later and how supportive the Cove community was during our loss.

I am fortunate in that most of the life-changing events have brought out the best in the people around me. I'm aware that this is not true for everyone, so I am grateful that it is true for me.

Sunday night, I got to witness some of the very best of the Cove. Even putting aside the fact that Martinsburg Volunteer Fire Co. Assistant Chief Richard Brantner was alert enough to notice a haze in the air and track it back to a fire in the laundromat. Then there was the response from the volunteer fire companies of Martinsburg, Roaring Spring, Williamsburg, Duncansville and Freedom Township. They all showed up fast and rapidly got control of a fire that had taken a pretty good bite out of the building already. Even before I left the scene Sunday night, several people from the Cove had approached me and Karen to offer help to us and the tenant of the apartment over the laundromat. We are very grateful for all of the offers of help and prayers.

Even with all of that goodwill and competence, there were two actions that stood out and which I feel compelled to tell the Cove community about.

Since I am a member of Station 80 (although I could be more active), I get notifications via a text to my cell phone when the station gets a call. On Sunday, I was just getting ready to go close up the laundromats (Karen was not feeling well) when I got a text stating that there was a fire in a commercial building. The address was 109 South Market St., Martinsburg. It took a second for me to recognize that the address was the laundromat. I immediately went outside and looked across town to the south, expecting to see a glow in the sky from the burning of the old livery stable behind the laundromat. Not seeing anything, I drove to the laundromat in a state of high anxiety. As I parked my truck across the street, I saw a Station 80 fire engine parked on the street outside the laundromat and – confirming my fears – yellowish smoke billowing from the upper windows of the laundromat.

Non-firefighters might not understand the essential bravery of this act. A firefighter dragging a hose up a flight of stairs on a rescue mission faces a lot of challenges. For one, he's wearing about 80 pounds of gear. Yes, the gear is there to protect him from heat and other dangers, but it's still a lot to be carrying.

Second, the firefighter has no idea what he's getting into. He is usually entering a place full of baking heat and with very limited vision. Sometimes it is impossible to see at all and the only way to get around is by feeling walls. And in this environment – encumbered, overheated and blind – a firefighter has to carry out a critical mission: Search the entire area for injured people.

The mission is worse when you know you're looking for a child. Children are smaller and better at hiding than adults. It is not a fun task and is made worse by knowing what you might find.

No one was home and no one was injured in that fire, for which I am eternally grateful.

The second act was less dangerous but still showed great generosity of spirit. When an adult male member of the family showed up on the scene, he was very upset by the possibility of losing some family photos which were very important to him. He asked the fire officials if it would be possible to check to see if the photos could be found. They were stored in boxes, so it was possible that they had survived the fire. With smoke pouring from the windows and firefighters still trying to control the fire, the young male was told that there was nothing that could be done at that time. Maybe after the fire was out, a search could be made for the photos. It was clear that firefighters thought that photos did not have much of a chance of surviving the fire, which had burned very hot in the apartment. But they were willing to check.

With the fire under control and the upstairs cleared of the worst of the smoke, three firefighters put a ladder up to a second-story window in the front. Two firefighters anchored the ladder while a third carefully entered the room which just minutes ago had been burning. The inside firefighter worked carefully around the room, which now had a huge hole in the floor.

Let me be clear here that the firefighters and officers on the scene did not have to do this search for personal belongings. They could have told the young man that the photos had probably burned up and a search was too dangerous. They could have simply refused. But they did not. Recognizing that this young man had already lost so much, they went above and beyond to retrieve for him something precious.