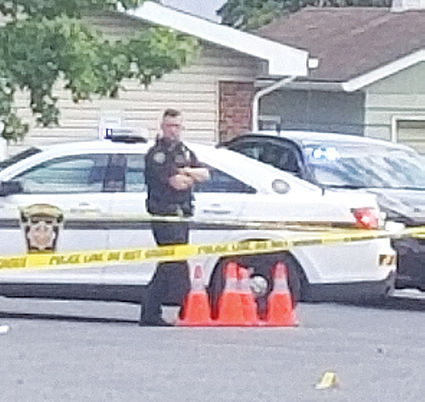 A policeman guards the scene of an officer involved shooting in Roaring Spring on July 26. After a nearly four-month investigation, Blair County District Attorney Richard Consiglio ruled the shooting justified.

The officer involved in the fatal shooting of a man in the parking lot of the Roaring Spring Department Store in July has been cleared of any wrong-doing and can return to work.

Morris has been on paid leave since the incident while the Pa. State Police and Blair County District Attorney's office conducted its investigation.

In a statement released by Consiglio, he said his review of the evidence showed it was "reasonable" for Morris to use deadly force as "Messner refused to comply with Officer Morris' commands, stated he had a firearm and then turned his fully loaded firearm on Officer Morris."

Consiglio said the toxicology report showed Messner had a level of methamphetamine in his blood "exceeding the upper limit which can cause violent, erratic behavior and hallucinations."

Consiglio said that based on his "exhaustive review" of the information provided by the Pennsylvania State Police investigation, he is satisfied that the use of deadly force was "legally justified."

Consiglio's ruling brings an end to the saga that began on the evening of July 26 when the Blair County 9-1-1 Center received multiple calls about a man acting erratically in the parking lot of the Dollar General in Roaring Spring.

Officer Morris responded to the call and approached Messner, who by then had walked to the parking lot of the Roaring Spring Department store.

Messner produced a handgun and raised it toward Morris, prompting the officer to fire his service weapon, striking Messner in the chest. Messner was pronounced dead at the scene.

According to Messner's wife, Alda Jays Messner, he was a member of the Pennsylvania National Guard, having served tours in Kosovo and Iraq.

Mrs. Messner told the Herald in August that her husband started showing signs of Post Traumatic Stress Disorder (PTSD) after returning from deployment in Iraq in 2008.

Mrs. Messner said that for 10 years after her husband returned from Iraq, he was on a "downward spiral" that he couldn't stop on his own.

Mrs. Messner said she "vigorously" tried to get her husband help, but was met with roadblocks from the Veterans Administration at every turn.

Mrs. Messner also said she doesn't hold any anger or blame against Officer Morris while acknowledging the effect the incident had on him.

"I don't fault the officer," Mrs. Messner said in August. "He only had a second to react. I don't blame him at all. He has his own hell to go through."