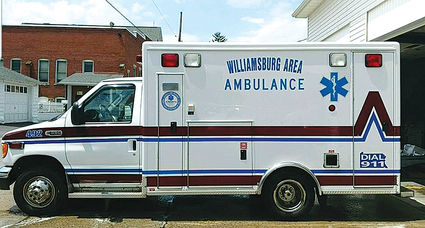 Williamsburg Ambulance will end its service at the end of the year. Officials said low insurance reimbursements and lack of personnel have made it impossible to continue operating.

As Williamsburg struggles with the recent loss of its pharmacy, it was dealt another blow with the announcement that the Williamsburg Area Ambulance will be closing its doors at the end of the year.

In a letter posted online by ambulance Chairman Robert S. Craig, rising costs and lack of personnel were cited as reasons for the closure.

"It is with a sad heart that I need to write this letter," Craig wrote. "The board of directors and Williamsburg Fire Company have tried over the past few years to keep the ambulance in service and running, but with declining reimbursement from insurance comp...