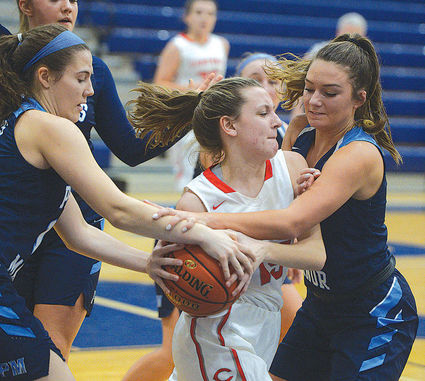 Central High School's Leah Johnston is tied up by Penns Manor's Abbey Sleppy and Alycia Zayahak as she tries to outbound a pass earlier this season.

The Central Lady Dragons began Mountain League play last week and swept a pair of games. The Dragons raised their record to 3-1 after defeating Penns Valley and Bald Eagle Area.

On Dec. 11 the Lady Dragons jumped ahead 11-7 after one quarter and extended their advantage to 28-19 at halftime. After winning the third quarter 11-6 the teams played evenly in the final frame to set the score at 53-40.