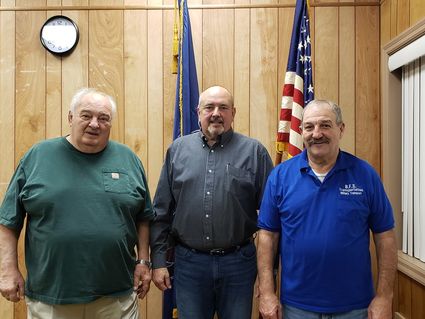 The two members of the Williamsburg Borough Council after being sworn in by Mayor Ted Hyle (center) are Jim Foreso (at left) and Donald Zimmerman.

Members saw a definite increase in costs for landlords coming to the borough. Council members instructed Borough Manager Joe Lansberry to try to get better pricing from other firms before the Jan. 6 reorganizational/regular meeting. Lansberry said another inspection office in the area provided lower costs but would cost $25 per hour to complete paperwork which was already included in the PMCA prices.

After much discussion, Councilmember Ed Patterson made a motion to continue with PMCA as the borough's enforcement office and to adopt the new fee schedule. Councilmember Bruce Hamilton seconded motion, which passed. Fees will go to $75 for a single dwelling. For multi-units, it will be $150 for the first two units and for those with more than two units, $50 each.

Borough Manager Joe Lansberry also brought up public concerns about making the area around the borough building a one-way. Councilmembers agreed that this would benefit public safety. Councilmember Patterson made a motion to make the area one-way and to purchase signs designating area as such. Councilmember Jim Foreso seconded and the motion passed.

Manager Lansberry also said the First Street home in which the borough owns half of the duplex is in the process of getting demolished as grant money is coming in.

Chief of Police Rowdy Kagarise gave council members a report for the year with the police responding to 843 calls, which Kagarise said was "pretty consistent" with recent years.

During the reorganizational meeting, Donald Zimmerman was nominated as borough council president, Jim Foreso was named vice president and Ed Patterson was named president pro-tem. Evey Black Law Offices of Hollidaysburg was retained as the borough's solicitor and Young, Oakes and Brown of Altoona was retained as auditors.