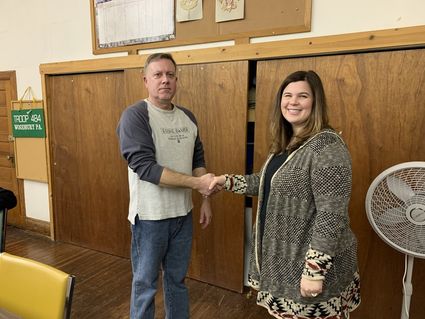 Ron Dibert (left) is the newly appointed member of the Woodbury Borough Council. Shown is President Kristi Oberman welcoming him.

The Woodbury Borough Council met on Jan. 6, 2020, the first Monday of the year.

Ron Dibert was appointed and sworn in as a new council member by Kristy Oberman.

There was nothing to report on Woodbury Area Community Center or BCAM.

In old business, a majority inspector is still needed.

In new business, council held its reorganization and made appointments. Todd Hoover was appointed for another five-year term on the water authority.

Christy Oberman was voted president. Shawn Claycomb retained the vice chairman position. Barb Wilt was retained as secretary/treasurer. Gerard Rickards was retained as township solicitor, as a member of the firm Allison and Rickards of Bedford.