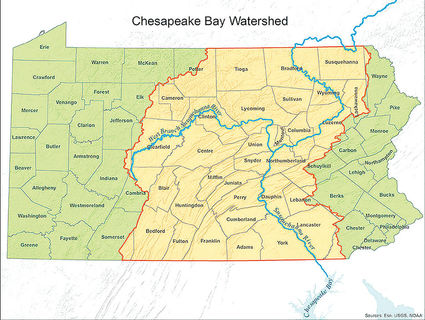 Half of the land area of Pennsylvania drains to the Chesapeake Bay from four major river basins, and Pennsylvania comprises 35 percent of the entire Chesapeake Bay Watershed. Both Blair and Bedford counties are in the watershed and thus are affected by state and federal actions regarding the bay.

Maryland Gov. Larry Hogan on Jan. 7 called for his state to initiate legal actions against Pennsylvania, citing the "obvious inadequacy" of its Chesapeake Bay cleanup plan, and against the U.S. Environmental Protection Agency which he said has "no intention" of forcing his northern neighbor to do more.

In a letter to Maryland state Attorney General Brian Frosh directing the action, the Republican governor said that Maryland wastewater treatment plants, farmers and municipalities had helped meet the region's Bay cleanup goals and invested huge sums of money. But, he said, "Pennsylvania and...