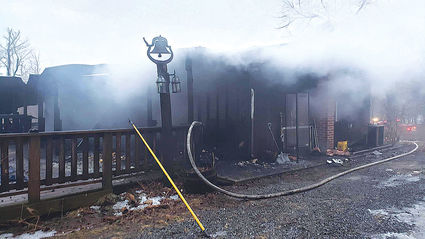 An early-morning fire on Sunday, Feb. 2, destroyed the home at 111 Woody Lane in East Freedom. Area firefighters from seven area companies were able to knock the blaze down in about 15 minutes and had it under control in about 30 minutes.

Henry said when firefighters arrived, the one-story home with a finished basement was fully engulfed in flames. The chief said firefighters were able to knock down the fire in 15 minutes and had the blaze under control in about 30 minutes.

No one was injured in the fire, Henry said. A Logan Township police officer and his family, including a newborn child, escaped.

According to Henry, the fire destroyed both of the fami...