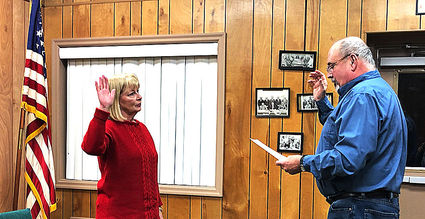 Paula Hamilton of Williamsburg was sworn in as the newest member of the Williamsburg Borough Council during the regular meeting on Monday evening, Feb. 3. Hamilton is shown being sworn in by borough Mayor Ted Hyle.

Borough resident Paula Hamilton was voted onto the Williamsburg Borough Council during the regular meeting on Monday, Feb. 3.

Hamilton was chosen by a council vote of 3-2. The other applicant was borough resident Lugene Shelly.

Councilmember Ed Patterson said he "was very pleased with both of the candidates and appreciated their interest."

In his mayor's report, Hyle remarked on the year-end fire...