A Trial (Sort of) 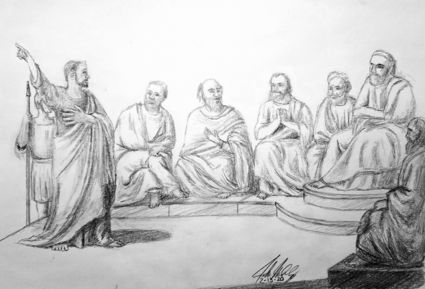 We will look at this preliminary to a trial. Actually, they never get farther than opening arguments. It is pretty hard to understand who is actually in charge. It should have been Governor Felix. But it begins as soon as the Accusers, the leaders of the Jews arrive in Caesarea. Surely Commander Claudius Lysias should have been there, but he was not. When we actually close this first segment it is because he is not there.

The Jews have brought with them an orator, Tertullus, who makes his opening statement pretty quickly. He begins by flattering the governor. I think nobody believed his flattering, including the governor. But he then brings three basic charges: 1. He is an insurrectionist (agitator, fomenter of trouble around the world). 2. He is a ringleader of a religious sect (unrecognized by Roman law and government). 3. He profaned the Temple. Actually he also accused Paul of being a plague. That was just a bit of character assassination, not an official charge.

It seems intended to turn Governor Felix against Paul. There is also a bit of a dig against the Roman commander. saying they were fully prepared to handle the issues until the commander interfered violently, took the matter out of our hands and sent it as a burden to you governor. He is supported by the Jews present.

The governor does not actually call on Paul to make defense, only nods to him. But we know Paul does not require much prompting. He is always ready to speak. He answers charge 1. (see above). He would not have had time to organize an insurrection, having only arrived in Jerusalem 12 days before. [That could be proven with evidence that he was on a sea-going boat from Greece until 12 days before and for the last five days had been in Roman custody.} 2. There were no witnesses to speak against him saying he had been arguing, preaching, teaching, in the Temple at all nor causing any disturbance. 3. He did nothing to profane the Temple.

The underlying charge was that he had brought Gentiles into the Temple. Actually Gentiles were allowed in the Court of the Gentiles but not in the inner Court or the Holy of Holies. There were no Gentiles arrested along with Paul and had they been there they should have been arrested as well or stoned to death. Paul goes on to say he worships just like his accusers do. He has a hope in God.

Part of the debate was about Resurrection from the dead, which is also a part of the Jewish understanding and teaching. He also mentions that he had brought an alms-gift for the needy in Jerusalem. He also mentions paying for ritual purification gifts for others. There should have been a record of those payments for whom and by whom they were paid and when. These persons should have been called to witness as well.

With that, Governor Felix adjourns the trial, and awaits the arrival of the Roman Commander as a witness. We might note Felix has some private interviews with Paul later.