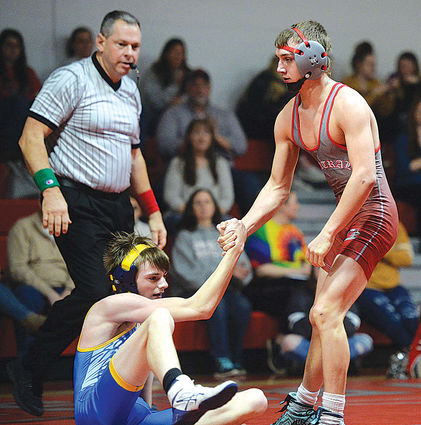 Central's Ian Crouch (right) gives a hand up to Claysburg-Kimmel's Hunter Knisely after defeating him in the 126-pound match on Feb. 4 at Central High School. CHS was victorious 48-29.

It was a busy week for the Central wrestlers as they had a pair of dual meets and also participated with five other teams in the Claysburg Duals.

The Dragons hosted Claysburg-Kimmel on Feb. 4 and were victorious 48-29.

Amazingly, Ian Crouch was the only Dragon wrestler to compete and win. Crouch had a fall in 1:03 against C-K's Hunter Knisely in the 126-pound bout. CHS was beneficiaries of seven forfeit wins.

C-K had three wrestlers who won on the mats. Cade Keithley pinned Will Park at 138 pounds, Levi Brown won by fall over Tyler Hess at 145 and Kobe Harr earned a technic...