By RICHARD TATE
For the Herald

Hunters Say Culling Herd Not the Answer to CWD Problem 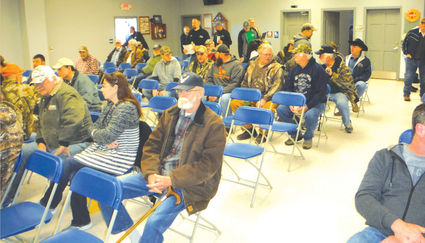 Sportsmen gather at the Freedom Township Fire Hall in East Freedom on Saturday, March 7, to hear an informational meeting on chronic wasting disease. More than 150 people were in attendance, which featured the Pennsylvania Game Commission's executive director as the main speaker.

State Rep. Jim Gregory began the meeting by noting that this was a follow-up to a meeting held a year ago where sportsmen had gathered to oppose targeted culling of the local deer herd. He said that the March 7 meeting was set up to discuss CWD a year later.

State Sen. Judy Ward said that the Department of Agriculture has advanced a grant to do three research projects about CWD.