By Darwin H. Stapleton
For the Herald 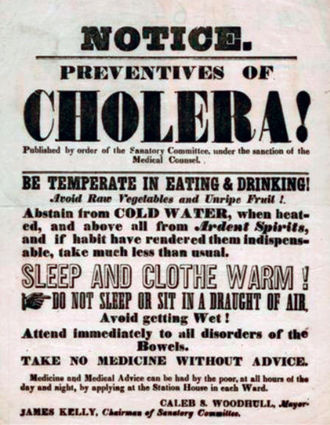 A 19th century cholera epidemic poster shows that some things have not changed.

Epidemics do not have politics. History shows that for the last 200 years, governments and health workers have reacted in much the same way to each epidemic.

As an historian, I have been studying public health and disease for 40 years. I suggest that, by drawing on history, it is possible to summarize the typical stages of epidemic diseases, and therefore to provide some of the needed background information for those who are worried about the spread, at the present time, of a strain of the coronavirus officially designated Covid-19.

While understanding the typical stages of epidemic disease will not prevent any individual from getting the disease, it may be reassuring to know that it is likely that the current epidemic ultimately will be better understood and controlled.

At the same time, it is important to know that each epidemic has unique features, both because of the specific aspects of the disease, and because social and economic conditions that affect the spread of the disease change over time.

Here are the general stages of an epidemic disease as shown by history:

Stage 1: A new disease, or a variant of a previously-known disease that affects humans, appears somewhere on Earth. It is not immediately recognized as a new disease or variant.

Stage 2: People in the area of the disease recognize that illnesses are more severe than usual and sometimes leads to death. They inform local authorities, who perceive the problem merely another overreaction to a social issue that local people should solve on their own.

Stage 3: The disease spreads beyond the area of emergence. The severity of illnesses, and the death rate, can no longer be ignored by authorities and by doctors and other health workers. Authorities continue to believe that the epidemic is a minor problem and downplay its significance; health workers use standard methods, based on similar diseases, to treat the illness. Because some people recover from the disease, it appears that the methods are working.

Stage 4: The epidemic spreads so much that the disease begins to affect the operations of government and of commerce. Government officials and health workers now recognize that the epidemic is out of control and apply standard measures, such as quarantines to stop transmission, to try to limit it. Officials begin gathering information about the disease, such as death rates. However, the obvious inability to control the epidemic creates two responses: first, the general population becomes anxious and fearful, with some elements of panic, while there are reactions such as flight from the major sites of infection and hoarding medical supplies. Second, officials blame other people and institutions for their own missteps and failures.

Stage 5: Statistics and medical observations begin to show the dimensions of the epidemic and some means of possible containment. The medical establishment now is able to identify who has the illness, but knowledge of how to avoid the disease remains elusive. Deaths continue to rise. Quarantining has limited success. The epidemic continues to spread.

Stage 6: People in authority, particularly in government and commerce, recognize that serious strategies to control the disease must be implemented because the coherence of the social and political fabric, and their authority, are threatened. Controlling supplies is one of the unusual and drastic steps. Blaming others also is one of their strategies. (As of March 10, the U.S.A. is in this stage.)

Stage 7: Many infected people survive the disease and develop immunity. Some of the drastic steps are effective, and the transmission of the disease begins to slow, even though the epidemic continues and the death rate continues to grow. Good statistics on the rates of infection and death are now available to the public. Panic responses subside.

Stage 8: Sound medical advice about how to avoid and treat the disease is now available. The epidemic is largely controlled, although it continues to erupt in remote and previously untouched areas and populations. In the 21st Century, scientific studies of the disease are underway, drawing on emergency funding, with the intent to develop effective vaccines and drugs. But it is clear that effective vaccines and drugs will not be available for many months into the future.

Stage 9: Transmission of the disease is drastically limited due to widespread immunity, and disease incidence is reduced because people have a better understanding of how to avoid the disease and, if infected, how to treat the disease. The disease is therefore no longer epidemic even if there are a few cases to be found. Normal government and commercial functions return. Drastic control measures cease. While blaming and scapegoating continue, some clearheaded evaluations of the social and medical history of the disease occur, and some proposals are made regarding of how to control a future recurrence of the disease or a similar one. However, disputes about the expense and efficacy of responses limit forward-looking plans.

Stage 10: As the epidemic passes, studies of the disease lead to trials of vaccines and drugs to stop or limit future epidemics of the disease, although trials are not necessarily successful. Public discussion of the disease fades; it is of interest only to specialists planning for the future.

Editor's Note: Darwin H. Stapleton, Ph.D., is a historian of medicine, science and technology whose contributions to the history of public health have been published in Brazil, China, England, Italy, Portugal, Singapore, and the U.S.A.