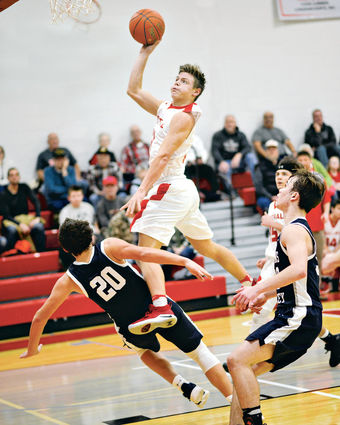 This photo by Gerald T. Leidy won first place for a Sports Action Photo in the 2020 Pa. NewsMedia Keystone Media Awards. Titled "Liftoff," the photo, published on Page A-8 of the Jan. 24, 2019, edition of the Herald, caught Central freshman Parker Gregg in mid-air as he drove in for a layup in a JV game against the Penns Valley Rams.

The Herald has won four awards in the Pennsylvania NewsMedia's 2020 Keystone Media Awards.

More than 2,700 entries were received from 122 news organizations in Pennsylvania. Entries – in 54 regular categories and eleven specialty categories across seven circulation and four broadcast divisions – were judged by journalists in Colorado.

The Herald competes in a division for weekly newspapers under 6,000 in circulation.

The Herald was recognized for: