Forget Not Their Purpose 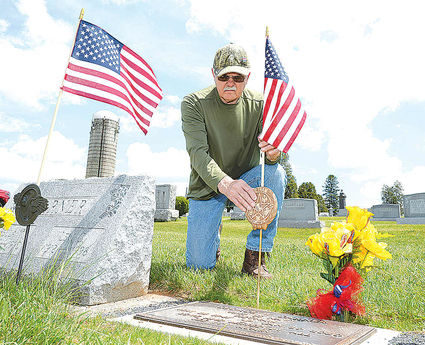 Jeff Garner of Martinsburg places a flag at the grave site of his cousin George Garner at Fairview Cemetery. George Garner was a Vietnam War veteran who died February first. Jeff Garner was among a group of 20 volunteers from VFW Post 43 who placed nearly 1,000 flags at veteran grave sites at cemeteries in the Cove area as part of Memorial Day remembrances.

Editor's Note: The following appeared in the May 28, 1970, edition of the Herald.

The observance of Decoration Day or Memorial Day in memory of the dead soldiers of the Union Army was first established by the Grand Army of the Republic in 1868. The order of General John A. Logan, commander-in-chief, designated May 30, 1868, as a day for "... decorating the graves of comrades ... ."

This May 30, 1970, flowers will decorate military cemeteries at Aisne Marne, Flanders Field, Surrey, Brittany, Mexico City, Manila, Pearl Harbor, Korea, Vietnam – and more bouquets will be strewn on graves of A...