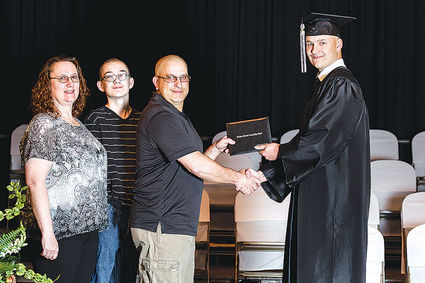 The broadcast, viewed on the district's Facebook page and on the Only in the Cove website, featured a commencement video of seniors receiving their diploma from their parents along with prerecorded commencement speeches.

Sherlock gave an enthusiastic welcome, making mention of a speech given by President Ronald Reagan during his run for governor of California in 1966, entitled "A Time for Choosing."

Reagan's speech expressed the need for people to come together not as right or left but as one to create a common good. Sherlock used this to challenge his fellow graduating class to choose to make the world a brighter place.

"We made it," Sherlock expressed. "Maybe not exactly how we dreamed this day to be, but we're still graduating."

Sherlock said, "Let's be remembered for greater things than a pandemic."

Sherlock left his classmates with a quote from Adidas runner Drew Hunter, "Young people, you won't ever regret going after something that seems scary and unrealistic if it's what gets you fired up every day. Life is short. Take chances, be unique, and explore a path you want to explore."

Allyson Ritchey addressed the class next. Ritchey described the events of the past few months and all that the senior class of 2020 has had to forgo.

Ritchey went on to remind listeners that this class came in amidst turmoil, specifically the events of Sept. 11, 2001.

Ritchey admitted, "What right do I have to complain when all of my loved ones are safe and healthy."

Ritchey highlighted several of the class of 2020's accomplishments, including the football team advancing it to the District 5 championship game. the FBLA chapter having 35 members qualify for the State Leadership Conference and the National Honor Society having 19 seniors.

"We will make it," Ritchey encouraged. "We will go on to bigger and better things."

Dr. Rick Mearkle, an alumnus of the class of 1972, spoke next. In his address Mearkle expressed that, "Life is full of surprises. Things don't always work out as we would expect."

Mearkle explained that it's how we deal with our adversities that matter, not the challenges themselves.

"No one can control what happens in the future, but we can determine how we handle situations."

Mearkle encouraged the class of 2020 to not let events discourage them or keep them from reaching the goals they have for themselves.

"Class of 2020, recognize the possibilities and challenges offered by the present moment. And embrace them with courage, faith, and hope."

Mearkle closed out his encouraging speech with the words "Diligence, honor, truth. May those words still be principles that guide us as graduates of Northern Bedford High School." 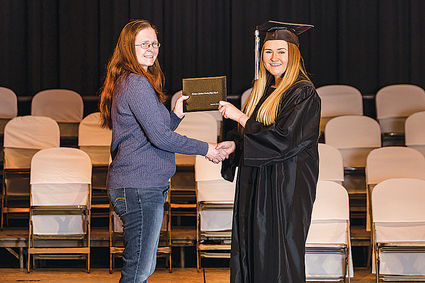 High School Principal Michael O'Dellick made the presentation to Superintendent Todd Beatty and the school board the graduates of the class of 2020. He explained that each of the graduates has met the requirements for graduating as set by the Pennsylvania Department of Education and the Northern Bedford School Board.

O'Dellick also expressed his hope to have an in-person ceremony later this summer.

Sarah Bowser gave the closing address in which she expressed congratulations to her fellow 2020 graduates. In her remarks Bowser quoted a line from Dr. Seuss' "Oh the Places You'll Go" "Congratulations! Today is your day. You're off to Great Places! You're off and away! You have brains in your head. You have feet in your shoes. You can steer yourself any direction you choose. You're on your own and you know what you know. And you are the guide who will decide where to go."

The ceremony can be viewed in its entirety on the school district's website, http://www.nbcsd.org.