Pastor Roberts: His Story, His Calling 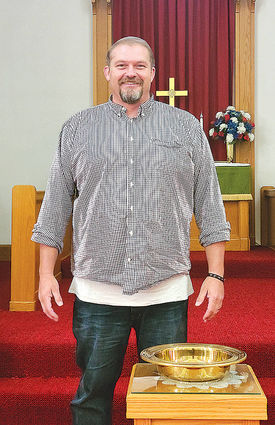 Pastor Matt Roberts at the United Methodist Church, Williamsburg. Roberts recently began his first appointment as pastor. He has been active in the Pa. Game Commission; Together We Serve, a non-profit group as vice president; a trustee of the Ned Smith Center for Nature and Art; a treasurer of the Lykens Valley Longbeards; a vice president of the Elizabeth Area Historical Society; and a member of Ducks Unlimited. Roberts hopes to become just as active in the Williamsburg community.

Have you ever in life felt a calling from God?

For Matt Roberts, the new pastor at the United Methodist Church and Cove Forge Church, he ran from that calling for many years – until he finally answered that call that brought him into the ministry years ago. Roberts recently started his first appointment as pastor at both churches.

Roberts came from the Millersburg area, just north of Harrisburg, with his wife, Cassie, and their five children – Haley, 15; Lain, 13; William, 7; Wyatt, 4; and Miriam, 3 months. When they first answered the call to come to the two churches, Roberts admits h...