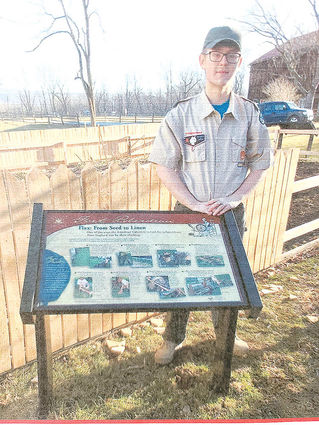 Cyrus Simmons, 16, of Williamsburg, recently earned his Eagle Scout Award. The youngster created interpretive signs for Fort Roberdeau's colonial garden, which was being expanded and revamped. Simmons is the son of Mike and Peggy Simmons.

According to research done in 2015, the average percent of Boy Scouts who actually make Eagle Scout was a surprising 6 percent.

Over the last few months, our small town of Williamsburg has garnered three with Cyrus Simmons becoming the third Eagle Scout since 2008.

Zachariah Richardson became Eagle Scout in 2019 and Joseph Kunsman in 2020.

Simmons is the 16-year-old son of Mike and Peggy Simmons and has an older brother, Dalton. Simmons is active in band and chorus at Williamsburg High School along with National Honor Society, Quiz Bowl, cross-country and track.

Simmons says he started in...