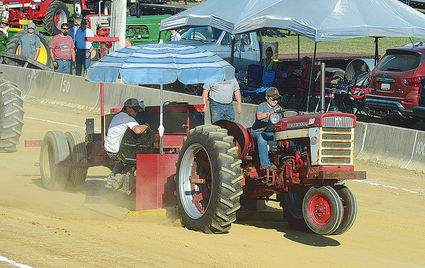 Ben Pritchett, 12, of Hopewell, gives it all he's got during the tractor pull competition on July 18 at the Southern Cove Power Reunion in New Enterprise.

The Greater Pennsylvania Military Preservation Association educated the community with a Vietnam display during the tractor pull show on July 18 at the Southern Cove Power Reunion show grounds in New Enterprise.

The display was educational with many articles on display including military vehicles. There was a variety of weapons and equipment that was used by troops in Vietnam. Members of this group were on hand to answer any questions folks had.

Former military members, community members and others were very intrigued and interested in what they saw and gave a positive feedback.

The preservation group is working on getting a museum up and running in Bedford County.

The tractor pull was a success as usual despite the 90-plus-degree temperatures. The concession stand was open, and the food was well received by all. 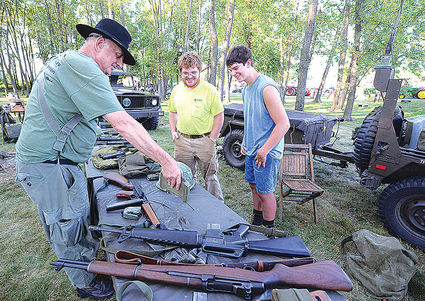 What it was really like? Randall Diehl of Sinking Vally (left), who served in the jungles of Vietnam, explains to Dale Clark (center) of Clearville and Tanner Yokum of Breezewood some of the weaponry used by font-line soldiers during the war. Diehl was park of a group from the Greater Pennsylvania Military Preservation Association that was on hand on July 18 at the Southern Cove Power Reunion show grounds in New Enterprise.