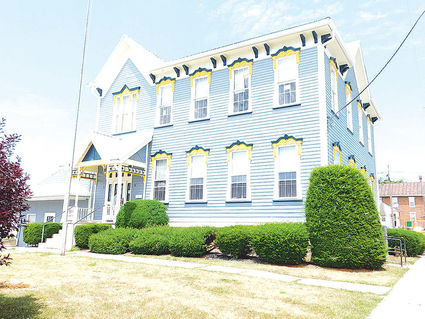 The old borough building in Martinsburg, now the offices of the law firm Haberstroh, Sullivan and George, LLP, has received a facelift. Xtreme Painting and Wallpapering of Martinsburg was hired for the project. The building required scraping and two coats of paint.

Attorney Teressa E. George is pleased with the new colors of her office building at 133 E. Allegheny St., in Martinsburg. Haberstroh, Sullivan and George, LLP, moved in to what may always be referred to as "the old borough building" in 2012.

The attorneys had been discussing a new paint job for the building for a few years and started getting bids for the job about a year ago.

Xtreme Painting and Wallpapering of Martinsburg was hired for the project and began scraping and painting a few weeks ago.

George downloaded a computer app from Sherwin Williams that allowed her to upload a photo of...