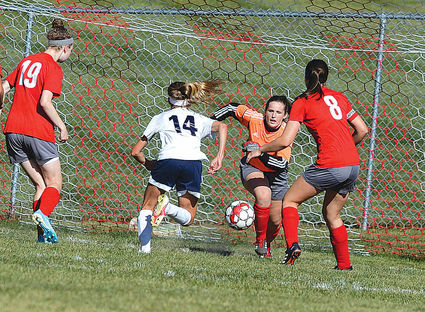 Central goalie Katryn Longenecker comes out to attempt to block a shot on goal by Penn's Valley's Scotty Dinges in first-half action earlier this season at the Spring Cove Middle School field. Looking on are Central's Alexis Weyant (19) and Emily Dunn (8).

In Northern Bedford's 2-0 win at Berlin-Brothersvalley on Sept. 26, Emily Heck and Abby Kline scored for the winners.

Northern Bedford hosted McConnellsburg on Oct. 1 and rallied for a 3-2 victory. With her team trailing, 2-0, Abby Kline scored twice in a three-minute span to help the Lady Panthers tie the game at halftime. Kline completed her hat trick with a second-half goal, with the assist credited to Emily Heck. NB improved to 5-2 with the win.