By From the Herald Archives 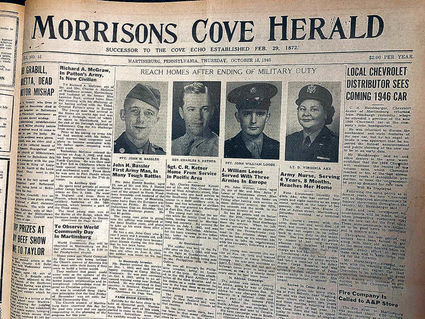 The Herald of Oct. 18, 1945, carried several stories of servicemen and women coming home from World War II. Publisher Allan J. Bassler's grandfather John H. Bassler was one of them. His photo appears on the left of the photos above. His story, as told by the Herald of the day, appears here. Other homecomings celebrated were Sgt. C.R. Ketner, Pfc. J. William Loose and Lt. D. Virginia Ake, army nurse.

John H. Bassler was born in a farmhouse outside of Martinsburg and barely 21, the United States government sent him overseas to fight the Axis powers.

He "toured Europe, paid for by the U.S. government," he used to say.

He went ashore on D-Day, accompanied an artillery unit across Europe, was badly wounded, lost good buddies and ultimately ended up in the Battle of the Bulge.

Some of my best memories are nights when we would sit at the kitchen counter of his modest...