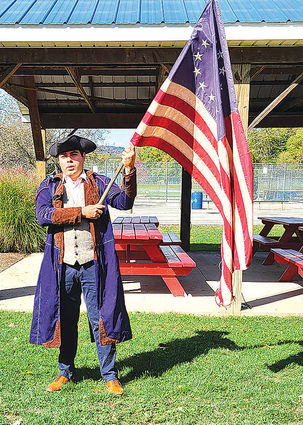 Williams Benitez, in his Revolutionary War outfit. Benitez sang a spirited version of the National Anthem to the crowd at the voter registration event on Oct. 18. Benitez has been a frequent sight around the Cove this year, putting his patriotism on display. He encourages Americans to appreciate their country and the freedom that they have to elect leaders.

More than 200 people gathered in Williamsburg on Sunday, Oct. 18, for a voter registration event called "Cut the Pork."

McClintock was one of the main organizers for the event.

"What's remarkable is that we also registered 20 voters during the event, but we don't know the party affiliation," McClintock said.

Of the various voter registration events in Catharine and Woodbury townships and Williamsburg Borough, there have been more than 50 new voter regist...