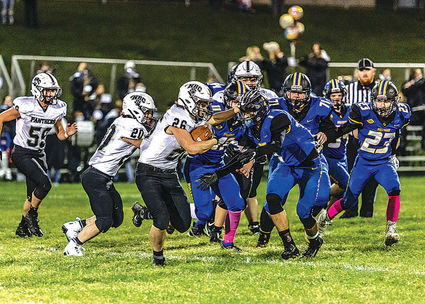 Northern Bedford senior Dalton Smith (26) looks for some running room at Claysburg-Kimmel on Oct. 16. Smith scored three touchdowns on the night -– one rushing, one receiving and one on an interception return – as the Panthers cruised to a 56-6 victory. Northern Bedford improved to 5-1, while C-K slipped to 1-5.

The scores – six offensive, one defensive and one special teams – helped the Black Panthers (5-1) roll to a 56-6 victory, their fifth straight win. The Bulldogs' fourth straight loss dropped them, to 1-5 on the campaign.

NB senior Dalton Smith scored three touchdowns on the night – one rushing, one receiving and one on an interception return. He finished with 86 yards rushing on nine carries, 62 yards receiving on two catches, six tackles on defense and a 95-yard i...