How Many Presidents Have Visited the Cove? 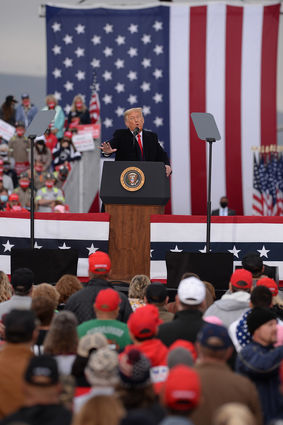 Not too many presidents have made more than a brief stop in Morrisons Cove, as best the Herald staff can determine from Herald archives. President Trump traveled to the Altoona-Blair County Airport in North Woodbury Township, outside of Martinsburg, and spoke for a little over an hour on Oct. 26, 2020. Trump is engaged in a bid to be re-elected president and is facing former vice president and Democrat Joe Biden in the race.

We at the Herald were not sure how many U.S. presidents have visited Morrisons Cove, and like many residents, we were curious. Unfortunately, the Herald's archives are not digitized and can only be searched manually, by checking old files or by paging through past editions of the Herald.

While we're still looking (and will publish any results that we find), we took a shortcut by asking Herald Publisher Emeritus David Snyder. Mr. Snyder's response included the following:

I'm pretty sure that Gerald Ford flew into Martinsburg en route to the dedication of the Raystown Lake/Dam, which I cove...