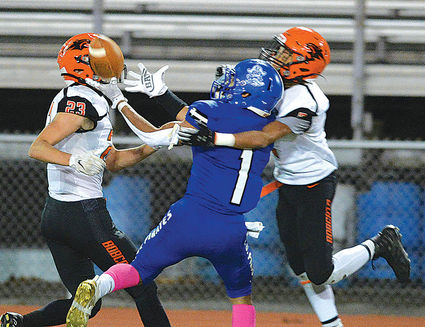 Williamsburg's Jahmarea Wansley (1) pulls in a throw for a 22-yard reception against Blairsville's Devon Witmer and another defender in first-quarter action Saturday, Oct. 24, at Hollidaysburg High School. WHS earned its first playoff win since 1989.

The Williamsburg High School football team overcame a 1-3 start to advance to the District 6 Class 1A playoffs this year.

After winning their last two regular-season games, the Blue Pirates pulled off a first since 1989 – they won a playoff game Oct. 24.

WHS lit up the scoreboard with 50 points in a 50-20 victory over Blairsville at Hollidaysburg's Tiger Stadium. The seventh-seeded Blue Pirates improved to 4-3 overall, while the 10th-seeded Bobcats dropped to 2-5.