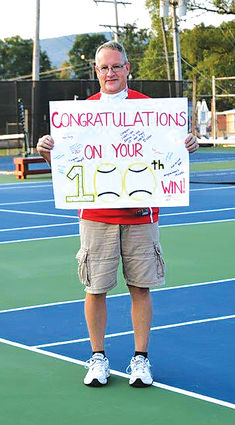 Central tennis coach John Riley earned his 100th career coaching win with a victory over Huntingdon on Sept. 24. He coached the program for 14 years.

Riley earned his 100th career coaching win during the season.

The following is a question-and-answer format between the Herald and Coach Riley.

Herald: "How many years have you coached the tennis team?"

Coach Riley: "I have been coaching for 14 years. My career record is 101-93. The girls have won or shared eight Mountain League titles and one district team title in 2011."

Herald: "How did you get started in coaching the tennis team?"

Coach Riley: "I just had an interest in coaching back in...