Post-Election Rally Brings Out 200 in Support of President Trump 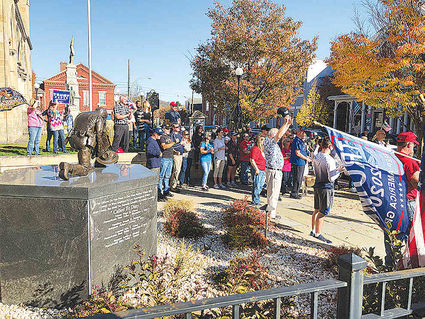 About 200 people showed up for a post-election rally in support of President Donald J. Trump. The rally was held on a sunny day at the front of the Blair County Courthouse in Hollidaysburg. Speakers voiced suspicions about the validity of votes electing former Vice President Joe Biden to the U.S. presidency.

About 200 people attended a post-election rally in Hollidaysburg on Sunday, Nov. 8, offering continued support for President Donald J. Trump and rejecting the apparent election of former Vice President Joe Biden to the presidency.

Speakers at the event included state Rep. Jim Gregory (R-80th) who was unopposed in the Nov. 3 election.

Speakers and the crowd expressed skepticism of the validity of voting by mail and Rep. Gregory told the crowd that he would be introducing legislation to end mail-in voting in Pennsylvania.

"This week, I will be introducing legislation to repeal mail-in ballo...