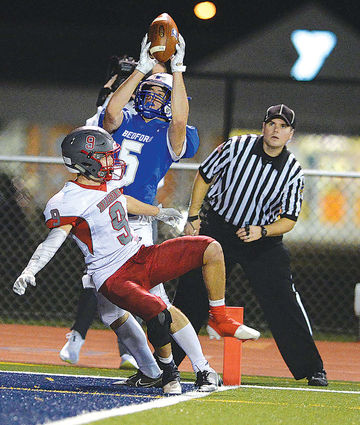 Bedford's Steven Ressler pulls in a throw for a third-quarter touchdown as Central's Josh Biesinger defends on the play Nov. 6 at Hollidaysburg's Tiger Stadium. Bedford earned a 28-13 victory. The defeat was the Dragons' first in nine games in 2020.

Twenty-one consecutive points that spanned the second and third quarters sparked the Bedford Bisons to a 28-13 win over Central in the first round of the PIAA Class 3A playoffs Nov. 6 at Hollidaysburg's Tiger Stadium.

Central's loss was its first of the 2020 campaign in nine games.