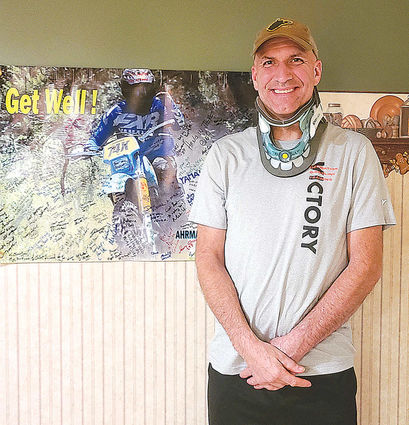 Christian Brumbaugh, of Williamsburg, poses with one of his many well wishes at his home in Williamsburg. Brumbaugh is recovering from a dirt bike accident in West Virginia.

For many dirt bike racers, winning a championship is the main goal. For Christian Brumbaugh, of Williamsburg, he was busy chasing No. 5 of his goal of seven No.-1 titles when he was involved in a dirt bike accident.

Brumbaugh was racing in the Mountain State Hare Scramble in Burlington, W.Va., when on the last lap, in first place, Brumbaugh wrecked his bike, flying over the handlebars and landing 20 to 30 feet in an embankment. Brumbaugh was then life-flighted to J.W. Ruby Memorial Hospital in Morgantown, W.Va., where he said, "I couldn't move from the neck down."