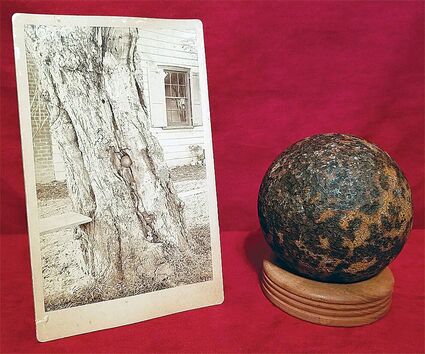 Items in the Adams County Historical Society collection include this cannonball, extracted from a cherry tree on the Joseph Sherfy farm. The society has launched a fund drive for the construction of a new building to house its exhibits, some of which were used by Director Ken Burns in his documentary on the U.S. Civil War.

The Adams County Historical Society (ACHS) preserves some of Gettysburg's rarest treasures, and many of national significance.

Its collection includes a program from Lincoln's famous address, thousands of relics gathered from the battlefield, personal belongings of esteemed abolitionist Thaddeus Stevens and First Lady Mamie Eisenhower, Native American projectiles, dinosaur footprints, and much more. To ensure that these tangible links to the past survive for future generations to study and appreciate, ACHS has launched a $5-million-dollar campaign to construct a new exhibit gallery, archives, and education center.

"For more than 80 years, we've amassed a collection that tells the story of one of America's most famous communities," said ACHS executive director Andrew Dalton. "Now is the time to create a worthy home for our unparalleled collection. Without the Historical Society, the memory and legacy of this incredible place would cease to exist."

The society has long outgrown its current home, which was always meant to be temporary. The building itself, an aging Victorian home in Gettysburg, also poses immediate risks to the collection it houses.

"Our current facility lacks important temperature and humidity controls, and there is no fire suppression system," ACHS Capital Campaign Chair Jacqueline White said. "We worry every day that these incredible resources – the very soul of Gettysburg and Adams County – could deteriorate further or be lost if we don't act now."

The new facility, set to open by fall of 2022, will be built just north of Gettysburg near a portion of the First Day's battlefield. The 29,000-square-foot complex will house artifact-driven exhibits that explore centuries of Gettysburg and Adams County history through the eyes of ordinary citizens of all ages and backgrounds.

According to ACHS historian Timothy Smith, "the interactive galleries will draw heavily upon hundreds of incredible, first-person accounts of events like the Battle of Gettysburg and Lincoln's Address."

In addition to exhibits, the new facility will feature hands-on programming, an event space overlooking Barlow Knoll on the battlefield, and an archive where visitors can conduct research on a variety of topics ranging from genealogy to Gettysburg, Adams County, and Civil War history.

The start of the drive

On Dec. 16, the historical society hosted a digital campaign event to announce more than $3 million in gifts and pledges made to date. Featuring filmed endorsements from documentarian Ken Burns, actor Stephen Lang, and historical novelist Jeff Shaara, the launch included a check presentation from Adams County's Commissioners for an additional $1 million in support of the project.

According to Burns, whose acclaimed film on the Civil War featured materials from the society's collection, "the history of Gettysburg and Adams County is not just local history – it's a microcosm of United States history."

Construction of the historical society's new home will begin next year.

"Not only will we save this incredible collection, we are creating a home for this community's remarkable story," Dalton said. "From prehistoric times to the days of Eisenhower and beyond, this will be an experience unlike any other."

To learn more about supporting the project, please visit

Donations can also be mailed to the Adams County Historical Society at P.O. Box 4325, Gettysburg PA 17325.

Naming and sponsorship opportunities are available for a limited time.

Since 1888, the Adams County Historical Society (Gettysburg, Pa.) has preserved over three centuries of local history. Learn more at http://www.achs-pa.org