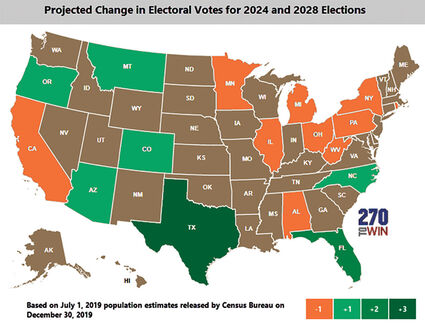 The new electoral map will be effective with the 2024 presidential election. Each state receives electoral votes equal to its congressional delegation (House + 2 Senators). This means that there is a 1:1 relationship between the change in U.S. House districts and electoral votes. According U.S. Census estimates, Pa.'s relatively stagnant population growth means that it is falling behind population growth in other states. As a result, the state will lose U.S. House seats and, as a result, it will lose electoral votes.

Pennsylvania netted just 83,000 more residents over the last decade as growth in the state stagnates compared to the southern and western regions of the country.

Only 500,000 more Americans live in the Northeast in 2020 as compared to 2010. In Pennsylvania, the total population peaked at 12.8 million in 2018 before settling at 12.78 million this year, according to the most recent U.S. Census estimates published this month.

Pennsylvania's stagnation will likely cost the state another congressional seat when districts are redrawn next year. The state has been losing seats since the mid-1940s...