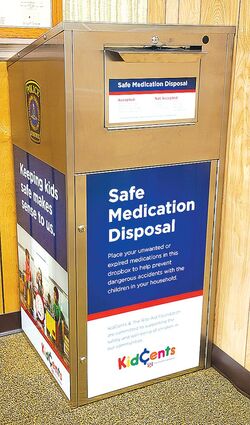 This is the medication drop box donated to the borough police department by the Rite Aid Foundation. Mayor Hyle explained that the borough is still researching how medication should be placed in the drop box. Those details will be released to public when they become available. Items not allowed in the drop box are illegal drugs, needles, lotions or liquids, inhalers, aerosol cans, thermometers and hydrogen peroxide.

"It's been a long time coming," Williamsburg Borough Chief of Police Rowdy Kagarise said of the medication drop box now located at the borough building.

The drop box was donated by the Rite Aid Foundation. Chief Kagarise had heard that the corporation was giving these boxes to municipalities who needed them. Chief Kagarise volunteered the borough of Williamsburg.

There will be policies and procedures for using the drop box. The rules will be released to the public at the next borough council meeting.