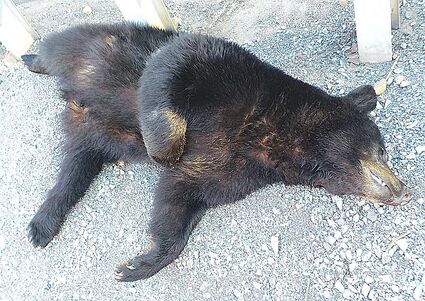 Richard Tate took this photo of a dead bear along State Route 866. The bear, which was hit by a car the night before the photo was taken, was presumed lying there for about 12 hours.

One morning in mid-December, Amber, my granddaughter, was driving along Route 866 on her way to her final morning classes in Johnstown. When she spotted a dead bear lying along the road, she called me. "You ought to go out and see it. It's not damaged too badly."

So, Donna; Sage, her dog; and I hopped into my old Ranger. Five minutes later we were looking at the dead bear. It was relatively small but not a cub. I snapped a photo of it and talked about it with a couple other sportsmen who stopped to take a look. One observed, "The bear made it through all those hunting days this fall. Now, w...