Community , 4-H Had a Leader and Friend In Fred Imler, Sr. 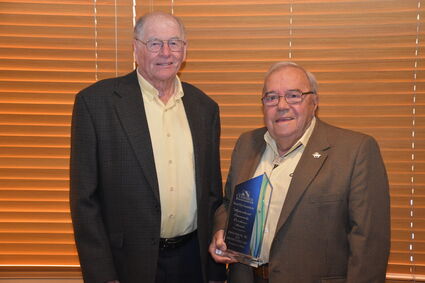 Fred N. Imler Sr. (right) holds the Blair County Chamber of Commerce's ACE Award after receiving it Oct. 15 at the Casino at Lakemont Park. Next to Imler is Donald Brumbaugh, who was the guest speaker at the award ceremony. Brumbaugh's family received the first Farm-City Award in 1970. Fred N. Imler Sr., 87, of Hollidaysburg, was known as a strong supporter of local youth agriculture, especially the 4-H and FFA programs. Imler died on Jan. 12, 2021.

"Anything that supported the kids, he was always there," Kristin Bigelow, former 4H educator, said.

"Fred always had a smile on his face," Joe Hurd, president and CEO of the Blair County Chamber of Commerce, said.

"His family was very important to him. He considered everybody that he worked with every day to be part of his extended family," his grandson Bryan Imler said.

Fred Imler Sr., who passed away Jan. 12, was very giving and had received many awards for his work and philanthropy, according to Bryan Imler...