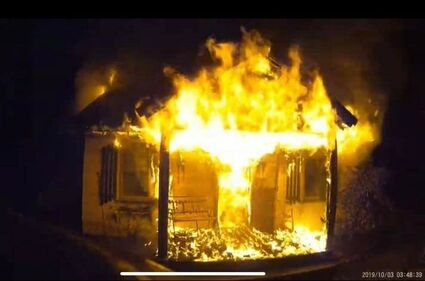 This unoccupied house at 351 Riverview St., Freedom Township, was destroyed by fire on Jan. 20. A Claysburg man was arrested at the scene for failing to obey police orders and driving through the fire scene.

Just before 6:30 p.m. fire crews were called to 351 Riverview St. to find the structure fully engulfed in flames. Crews battled the blaze at the unoccupied building for approximately three hours. The building was a complete loss, and no injuries were reported.

Meanwhile, as firefighters battled the blaze, police were arresting a man who drove through the fire scene after being ordered to stop.