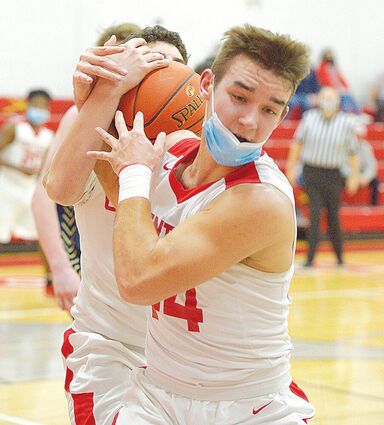 Central's Hunter Klotz collides with teammate Seth Bean going for a loose ball against Hollidaysburg on Monday, Jan. 25, at Central High School. The Dragons evened their record at 2-2 with a 69-42 victory. Game details and additional photos will appear in the Feb. 4 edition.

Hosting Tyrone on Jan. 20 in its home opener, the Central High School boys' basketball team fell behind early and was never able to catch up during a 63-51 setback.

"I thought our kids battled, especially in the second half," Central coach Paul Frederick said. "We had a lot of guys step up and play well for us."

Sophomore Seth Bean had a game-high 19 points for Central, and freshman Hunt...