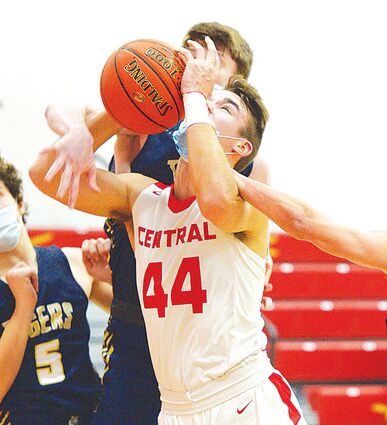 Central's Hunter Klotz (44) is fouled underneath by Hollidaysburg's Rocco Grassi on Jan. 25 at Central High School. The Dragons won 69-42. Two more victories during the week pushed the Dragons' winning streak to four games.

The Central High School boys' basketball team hosted Hollidaysburg on Jan. 25. The Tigers, playing their first game of the season, fell behind 14-0 and dropped a 69-42 decision to the Dragons.

"I really liked the balanced scoring we got from many of our players," Central coach Paul Frederick said. "Four guys had 10 or more points which is great to see. We got a huge spark from Hunter Smith in the first half. I thought we played well defensively throughout the night. We were able to make...