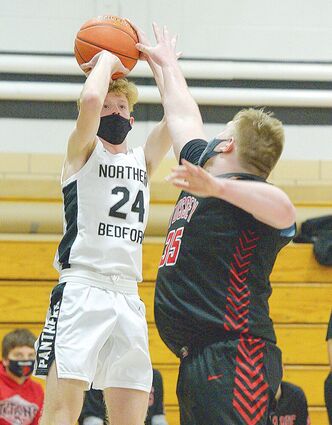 Northern Bedford's Cullen Lloyd (24) shoots from the baseline over Tussey's Chad Morningstar in earlier-season action at NBC High School. Three wins over the past week pushed NBC to 5-3.

The one-two punch of Northern Bedford's Thad Leidy and Hayden Foor proved to be too much for the visiting Everett Warriors last Friday night.

The Panthers took a 67-54 home decision largely on the 43 point efforts of the two seniors.

"We did some good things and seem to be improving," NB coach Randy Meck said of his 4-3 Panthers.

Everett opened an early lead at 17-14 after the first but the Panthers rolled to a big second quarter edge.

The 38-26 halftime lead was too much for the Warriors to overcome and Northern Bedfo...