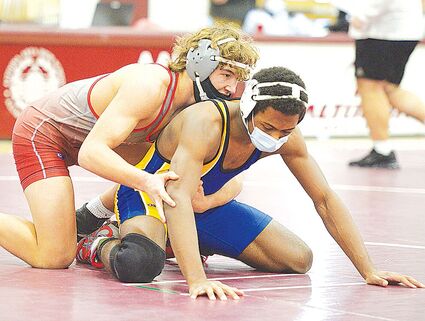 Central's Andrew McMonagle wrestles Bellwood-Antis' Aiden Taylor during the third-place match at 160 pounds during the District 6 Class 2A Championships on Feb. 20. The Central freshman qualified for the West Super Regional Tournament to be held Saturday, March 7, at IUP by placing fifth at the South West Class 2A Regional. McMonagle is 8-5 on the season.

McMonagle qualified for the super regionals by placing fifth at the South West Class 2A Regional held Feb. 27 at IUP. McMonagle split his four matches.

"Andrew put together an incredibly gutsy performance over the weekend, competing in a weight with two of the top three-ranked wrestlers in the state and being less than 100%," Central coach Dave Marko said. "His only two losses were to the No. 1-ranked 160-pound wrestler 4-3 and the thi...