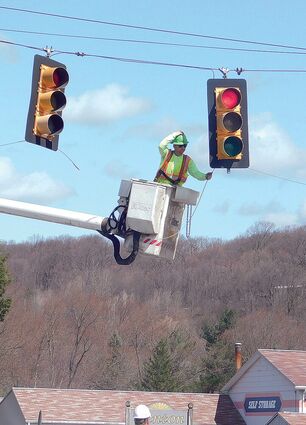 A worker for Tel-Power of Hollidaysburg braces against the wind to secure the traffic light at the intersection of Dunnings Highway and Shamrock Street in Newry Borough on Friday morning, March 26. Wind gusts of more than 50 mph snapped the cable that secures the lights in place.

High winds kept area emergency crews busy on Friday, March 26, as wind gusts of more than 50 mph in Blair County led to downed trees and electric power loss in parts of the county.

While Cove-area municipalities didn't report any power outages or property damages, road crews and fire departments were dispatched throughout the day to clean up downed trees and debris from the roads.

Martinsburg and Williamsburg came out mostly unscathed with Martinsburg responding to one call for a downed wire while Williamsburg was called out once for a wind-related incident. Apart from a few road signs on state roads, North Woodbury Township reported no damage or trees down.

In Roaring Spring, Friendship Volunteer Fire Company Asst. Chief James Musselman said that his company was called out four times for trees and wires down.

In Newry Borough, a wire holding the traffic light at the intersection of Dunnings Highway and Shamrock Street in place snapped.

While the light remained in operation, without its stabilizing wire, both lights were twisting in the wind. Crews from Tel-Power of Hollidaysburg were dispatched for repairs.

The only reports of power outages in the area came from Hollidaysburg Borough with the Blair County Courthouse and some neighboring businesses and offices losing power for around four hours.