Band of Sisters By Lauren Willig 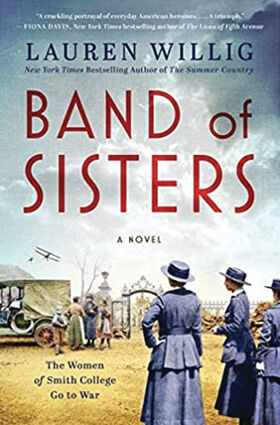 Lauren Willig, best-selling writer of historical novels, happened upon the plot of this true and heroic tale whilst conducting research for another novel. She immediately dropped her pursuit of that endeavor in exchange for a richer one: a study of the brave Smith College women who had gone to war in 1917.

Despite the aforementioned, however, “Band of Sisters” is an easy and entertaining read which draws in and holds the reader from the first introduction of its refined but adventurous characters.

“Band of Sisters” dramatically portrays the harrowing yet rewarding experiences of the Smith College Relief Unit, a trailblazing team of Smith College alumnae volunteers who helped French civilians decimated by the German army. This courageous troop of seventeen “Smithies” – all women, of course, as Smith was and remains a private, liberal arts women’s college in Massachusetts – accomplished far more in a few months than they and their doubters had ever expected.

Together, these brave and tireless former scholars brought aid and hope to a war-torn region, and learned much about themselves and each other in the process.

“Band of Sisters” is a compelling reminder of the power of the human spirit and the strength found in friendship forged by fire. This is a book worth reading, especially during these times of difficulty.