By Coach Amy Hileman
For the Herald 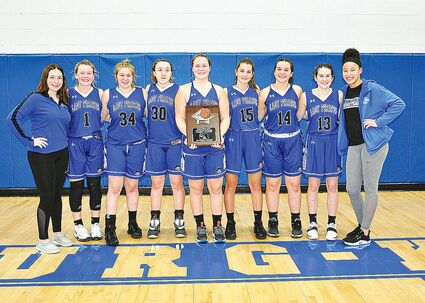 The Lady Pirates earned a place in the ICC Championship game vs. Tussey Mountain. The Lady Pirates prevailed in the semi and final, even though they were down two starters due to injuries. Despite this deficit, the team rallied together and played some of their best basketball all season. The team was able to end the season with a championship win after a season of dealing with COVID-19 delays/quarantines/closures and untimely player injuries. Shown in the photo are (from left): Megan Palmer, Ayla Hileman, Laney Prough, Krista Simpson, Anna Ward, Jade Carper, Kendel Norris, Brooke Stewart, and Jayla Woodruff.

The Lady Pirates (#No. 2 seed from ICC North) beat Southern Huntingdon (No. 1 seed from ICC South) in the Inter-County Conference Semi-Final with the score of 61-51.

This put the Lady Pirates into the ICC Championship game vs. Tussey Mountain (No. 2 seeded in ICC South who beat Bellwood (No. 1 seed in ICC North).