'Wrestling – Where I Feel at Home' 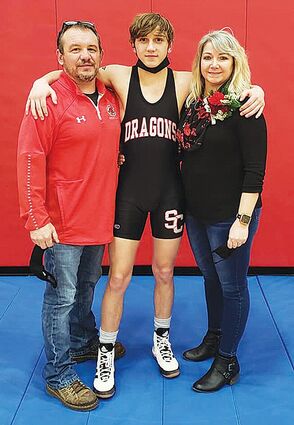 Ian Crouch with his parents, John and Brenda, during Spring Cove senior night.

Many think of basketball when Williamsburg sports history comes up.

But Williamsburg senior Ian Crouch might be able to change that to wrestling.

Ian is the son of John and Brenda Crouch of Williamsburg. Ian's wrestling love story began when his father took him to watch some Huntingdon wrestling practices around the age of 4, and "I fell in love with it," Ian said.

A few years later, Ian still wanted to wrestle but he was soon heading into junior high and Williamsburg did not have a wrestling team. Ian and his family, worked to get a co-op arrangement with a local school to continue his w...